Why you should use Twitter Cards to enhance your tweets exposure

I just launched this blog a few days ago and published a 15 page long report about the vacation rentals industries future outlook of Mauritius and then filed for the enhanced version of tweets called twitter cards. Though the developer section of Twitter states that it can take weeks to get approved I got my notification right the next day! Which I didn’t expect to happen considering that I only had 1 post up back then. 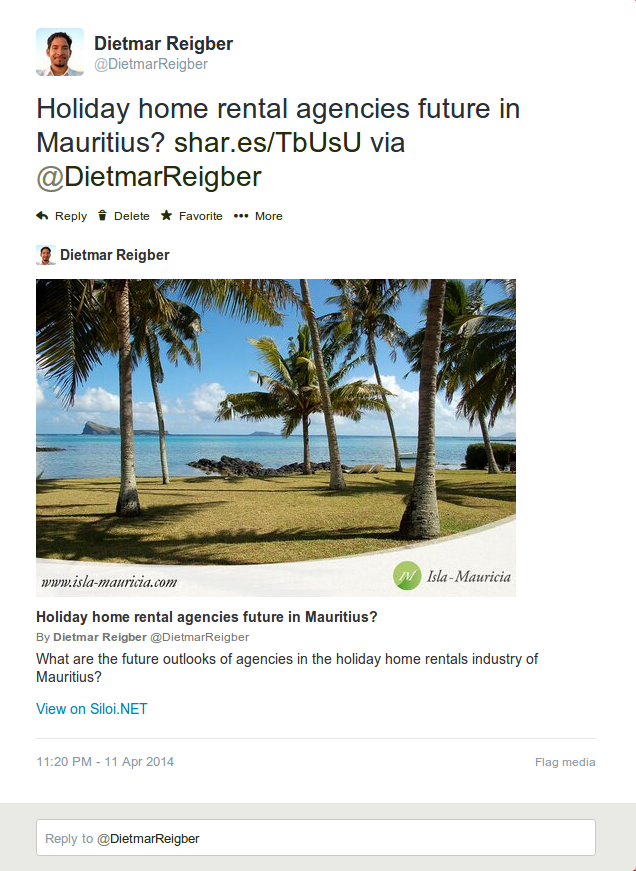 I wonder if it’s done manually but if that’s the case I expect them to have evaluated quality of content and also looked at my twitter account which is of neat standing.

How did I activate the twitter card?
I found out about twitter cards by using the plugin YOAST which is an excellent recommended SEO plugin for the WordPress CMS. It also features a link in their social media section through which you can easily access the twitter developer section and through a few clicks apply for your twitter card.

How to activiate twitter card meta data in wordpress via YOASTplugin

I’m really happy to see that it’s working and my first tweet that I shared myself to test looks awesome! I’m using the twitter card: Summary Card with Large Image: Similar to a Summary Card, but offers the ability to prominently feature an image.

YOAST plugin alters your blogs meta data and adds in the necessary required fields for this to work once twitter has approved your application. Looking at the meta data itself YOAST is doing a great job in making your meta data SEO wise optimal.

I also tend to pay more attention to a tweet that has a summary excerpt and a large picture. Your tweets will definitely get more attention and in this way you can drive more traffic to your posted content. And on top it looks awesome! If you like twitter you will like this even more!

Twitter Analytics
You can also get access to twitter analytics! In order for this to work you must fulfill a minimum amount of tweets. In their discussion here: https://dev.twitter.com/discussions/25376 its been mentioned by a twitter employee (@buster) that: “You will need to have at least 10 tweets within a week for the volume to be noticed and for the analytics dashboard to be turned on. Once the minimum number of tweets have been found, you should gain access within 24 hours.”