In my previous articles I have addressed the challenges which holiday rental agencies in Mauritius are currently facing and how they can expect a deterioration in their mode of operations if they do not handle quick in reinventing themselves or cut down costs drastically!

I have mentioned previously that for most owners of beach villas and apartments that they should still be doing fine as they can use other methods of doing their own advertising than going through an agency. Even though agencies play an important role, the landlords and clients can eliminate the middleman who is the agent by buying and selling directly, which is now easily possible on the internet. 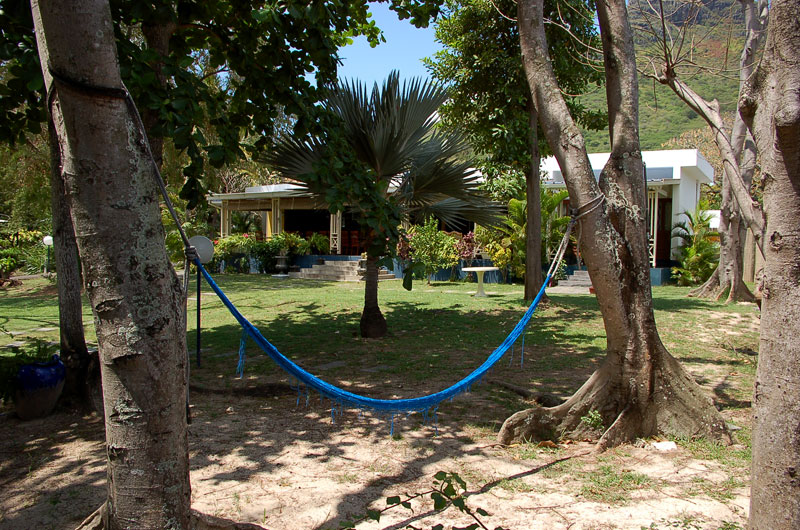 When it comes to tourism, my articles usually resolve around the theme of agencies and vacation rentals but do not address much Hotels in Mauritius. Now, the drastic sales measures that hotels in Mauritius have implemented is bringing results and these results might on one side be filling rooms for some, while some other structures are standing empty. This topic has been on my mind for a while but I wasn’t yet aware how serious this impact currently already is and how many part takers of the industry have been influenced to face a change in the scenery of how once tourism was running in the sense of occupancy and profit after turnover.

A friend of mine who is a revenue manager recently shared with me a link where Ms Josette Marchal-Vexlard who runs Les Lataniers Bleus Guesthouse in Black River, is being interviewed by the online magazine Ile Maurice Tourisme which bears the title of “An unsustainable year for small structures” (The article is in French). When I read that I thought it’s time that I dedicate an article to this situation as I considered this a clear alert signal. You might call me naïve to not have known. Though you’ll comprehend my stance that the tourism industry in itself is not small, is very vast in diversity and one formula or definition cannot nail down how the situation is like for others and that even an article is in itself very limited at addressing the whole scope of an ever changing and alive industry. Winners and losers will continue to exist in this industry.

Lux* sent me a proposal of a very cheap offer

While I was reflecting on the article I received at the same time an advertising in my notifications on Google+ which was showcasing an offer from Lux* as from EUR 146, see screen shot. Since time flies, this dates back to the 01.12.14. 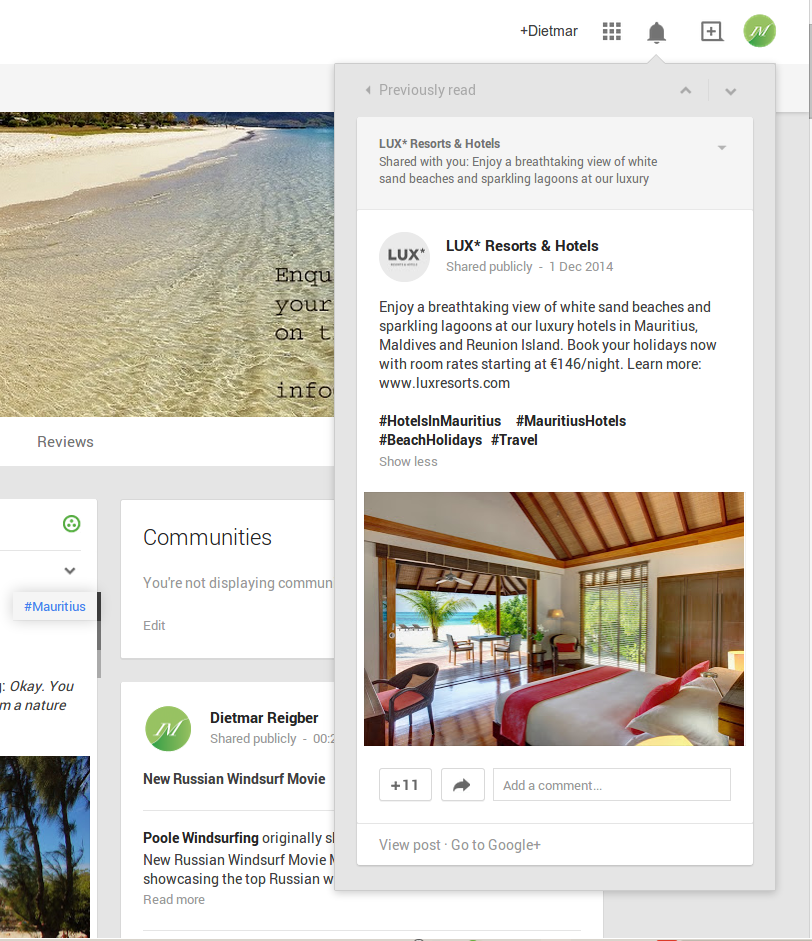 Lux advertising via Google Plus

This offer confirms what Ms Marchal-Vexlard is saying in her interview. Of course I do not mean to discredit Lux* resorts, this is a pure plain presentation of what the market currently has to offer. Resorts are forced to reinvent themselves to survive. While many resorts had to reduce their rates drastically and change their offers and services, those that are still selling on very high prices are having huge difficulties in having a profitable occupancy. I can tell because some resorts are offering very high discounts for the December peak season, and you can figure it out yourself by checking on Mari Deal which is usually a period where demand exceeds availability and a resort should have no need to advertise on local discount portals which in my opinion is negative sign of low occupancy. The lower rates of resorts lead to a competition that wasn’t present before, hotels in Mauritius, their rates now compete with beach villas, apartments, guest houses and more private properties and small hotels. While on one side during the double peak season of December from 21.12.14-10.01.15 a lot of places should be fully booked I was surprised again when I contacted a small hotel in Black River that they still had availability for all of their room categories! I mean this was unthinkable of just 1-2 year back! I can also confirm that I have been also informed by other partners that they are considering to close down. Especially when it comes to those more traditionally run guest houses.

In addition to my article Changes in the landscape of holiday rental agencies in Mauritius I have to concur that the same applies to guest houses and small hotels and other accommodation products in Mauritius.

Let’s get a little personal, since this is my blog, I can allow myself to wander from the subject and make the article a bit more spicier and personal, also a reason for you to venture on my blog.

When I started my agency Isla-Mauricia in Mauritius, Les Lataniers Bleus was one of the first places I visited and added to my portfolio of offers. This dates back to 2008. Ms Marchal-Vexlard showed us through the property, I did my photos and my colleague Miss Bibi did the descriptions. Les Lataniers Bleus is a unique place, villas scattered on a huge property facing the lagoon where couples can rent a room of a villa or families can rent the whole house. It has its very own charm. You can sit under the shade of the tree with sea view and surf the web with wifi in the garden. Dream holidays come true just like you would imagine the setting of Mauritius on a postcard. 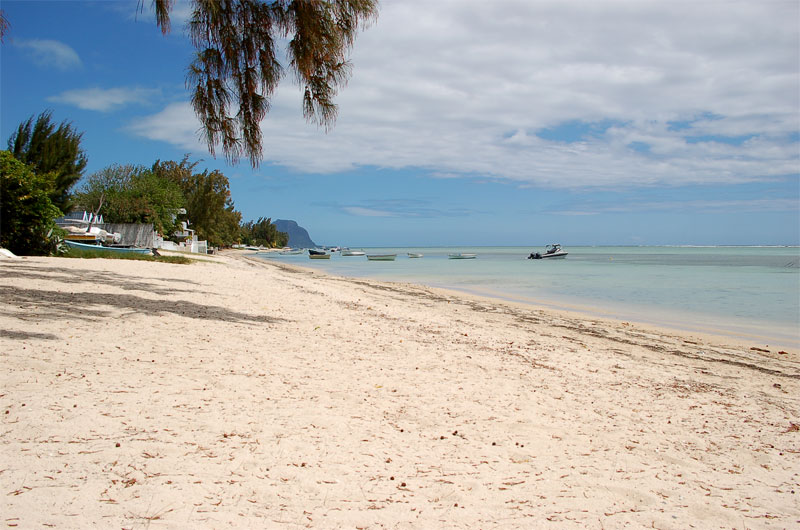 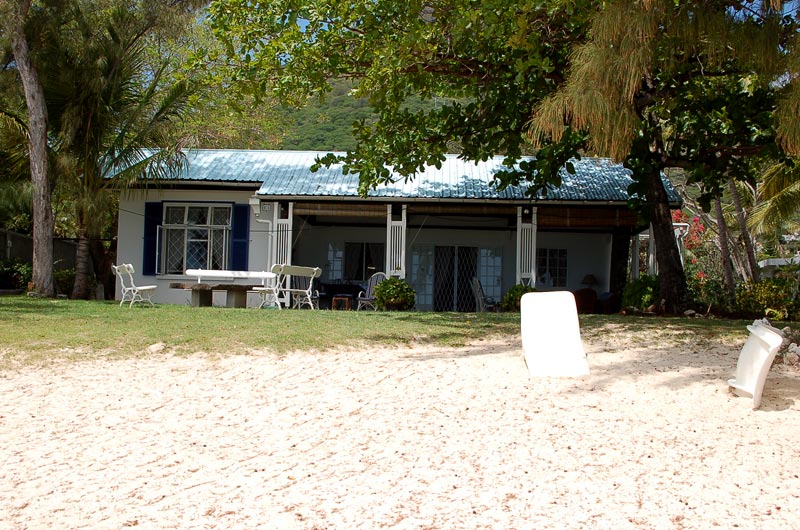 We added many properties on our website and out of 150 properties that we have added, only a very few performed well on a regular basis. Since we didn’t produce volume bookings and offer a very personalised service, our figures aren’t representative but I knew back from then that many guest houses were performing well and it was difficult to get availability. Prices of hotels were higher and many hotel groups were facing tough times filling their rooms and growing their debts.

Lux* is now back in profit zone. As of today their share price on the stock exchange has hit Rs.61.50 and in June 2014 a dividend of Rs.0.50 was announced by their board of investors.
You can read more here where Lux* currently stands financially.
Lux* stands out or gets easily noticed since it has done a huge job in regard to its re-branding, restructuring, renovation works – well the list is long. I’m not here to say whether Lux* was more expensive before or has become cheaper now. If you are in the tourism industry you can compare those rates yourself. What my logic says, if a resort, whether it is Lux* or another group has found a formula that works for them and allows them to be profitable, then it is here to stay. This is how the market works, there are winners and there are losers.

Guest houses will have to reinvent themselves, restructure, cut costs, find new strategies to attract clients. The market will regulate itself in a wild jungle manner. If there should be a strict structured regulation can be debated in regards to having a controlled rates disparity, what is your opinion? Please post in the comments section below.

Companies in Mauritius must take a share of their profits and invest it back to society which is called the Corporate Social Responsibility Tax. Resorts that have such a huge impact on their neighbouring villages, towns and the whole country could also practice a study of their impact and what strategies they could adopt to keep other businesses “alive” as a form of social responsibility. Well, for this to work it also needs to be a kind of win win situation. Still, in many cases I see this currently to be quite difficult to be applied.

Just a few weeks ago I was contacted by a couple from London who had a budget of EUR 350 per night for a 10 nights stay. I proposed them a beach villa right in front of a nice white sandy beach and azure blue lagoon. Personalised services etc. I also offered them a luxury apartment in Cap Malheureux with sea view.
My potential client made the comparison and mentioned to me that for the same price he can get a nice room in a resort where he can do more activities. Yes, of course each guest has their own preferences, but on first hand you might have thought, a beautifully located villa should be attractive. The client was saying, he would only take the villa if its cheaper than a resort. Since he was requesting for the double peak season where rates are usually extremely high and availability low he did indeed chose to go for a resort instead – because cheaper options were available.
There was a period of time where beach villas and beach front apartments represented an interesting alternative, which they still do but especially price wise they were very competitive in regard to hotel rates. Well this was a year ago and things have changed. I work with various property managers in Mauritius who manage such RES apartment complexes and for many of these I had great difficulty generating bookings as price wise a lot of them are quite pricey and do not compete any more to hotels, especially when it comes to couples. Even after applying all sorts of discounts and special offers, it still doesn’t compare and couples keep telling me they don’t need a 3 bedroom apartment, what a waste even if its price wise close to that of a 2 bedroom apartment and the big difference with hotels is that they come with half board or all inclusive included. For families it might still be a great deal of difference to stay in a 4 bedroom penthouse…

How are holiday rentals, RES villas and beach front apartments property managers changing their approach to remain competitive to keep attracting customers to their properties?

What is it that makes their offer outstanding or differentiates their offer from that of a resort? …after all they are just proposing an apartment with some services. Why even travel to Mauritius if you can get similar close to Spain and Greece…

What smart ideas and services have property managers come up with lately to make the stay of their guests a memorable one earning recommendations?
If you are a property manager or someone working in this industry it would be great to read from you in the comments section below.

Discover more of my photos at Flickr
Scroll Up