How to suck it up to get an influencers attention – but why would you do that?

Yesterday night I watched this recorded Google+ hangout on air (abbreviation: HoA) #TNTBootcamp – Influence Marketing Techniques & David Amerland which was hosted by Ronnie Bincer & Christine DeGRaff who run the Hangout Helper series who had as their guest speaker David Amerland. I have named the title of this post according to what was mentioned in the video and made reference to Martin Shevington – this mentioning made the biggest impact on me because it was so straightforward and quite clear that this is a challenging scenario many new comers look up to. …Because its now possible on Google+ network like it has never been before!

It’s been a while that I haven’t watched any HoAs with David Amerland and I truly missed them for a while so I decided to catch up again yesterday.
When it comes to the topics of semantics, connections and the future of search this is one of my favourite resource and influencer to get study material from. David has recently published a new book called Google+ Hangouts for Business: How to use Google+ Hangouts to Improve Brand Impact, Build Business and Communicate in Real-Time. I haven’t read it yet but you can also check what I posted about his previous book which also fits in very well in relationship to this video and topic: How I was influenced via a Google+ Hangout Video to make a purchase 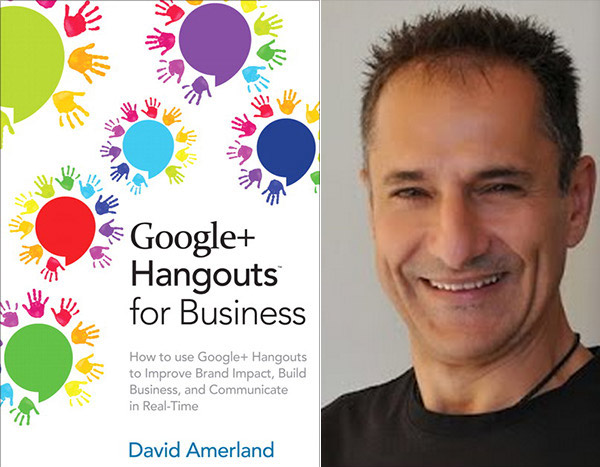 Google plus Hangouts for Business

The presentations of David Amerland are information laden meaning his material is worth several reviews at times. By reviews I mean to re-watch his presentations several times.
I believe that the logic behind semantic search is not only Google related but albeit the future of search itself. It might also be good to have several search engines for a better eco system and avoiding a monopole. If one search engine desires to become an answering machine, we users might still not necessarily at times require an answer but just plain results to choose form and create our own answer. Maybe the search giant will provide various options – they are smart, they will want to keep you glued to their system.
The market out there doesn’t belong to just one company -changes can occur, nowadays even faster than you would expect! Who knows someday a new search giant might surface! Maybe there is a search company out there that will master semantics at a point no one has ever seen and create a new wave of people switching their well known tools in accepting a new one. You remember the days when Google suddenly surfaced with just a simply entry field and search button? Maybe privacy, control and surveillance will freak out nations to adopt a new data supplier…

I have been reflecting on what was mentioned in this #TNTBootcamp – Influence Marketing Techniques & David Amerland and wondered though I haven’t read his book yet the influence those Google+ Hangouts are having. This is a small list I have come up with:

1. The question I ask myself is, what are the risks of presenting yourself on Google+ Hangout to the public. Could it also lead to the opposite -that is a negative effect? We know well that media chooses good looking people with great talents having beautiful voices. What if in the eyes of the beholders you are targeting you do not have the looks, your voice sounds awful and on top you speak their mother tongue with an accent +some grammar mistakes in your tenses?
You might also not look like clients might expect you to look like, have a different religion and so on… Your clientèle can be very picky from whom they’ll do their purchase. You might be able to identify with them BUT they might not be able to identify with YOU…
This was also partly answered by David Amerland that he does choose wisely on which hangouts he will part take according to various criteria. This also makes sure that you can talk about the topic. To speak on a hangout is very different in comparison when you are text writing a comment.

2. Watching experts present themselves on Google+ Hangout and discussing about topics in which they are pros gives me confidence. I will value their recommendations and this is also how I was once influenced to buy one of David Amerlands books as it was recommended by Mark Traphagen. See my article here:  How I was influenced via a Google+ Hangout Video to make a purchase

3. Am sure before you even get started in using hangouts you need to have a plan, a strategy, and some learned and practised background information about various questions that can surface. You need to be a pro and people will know that you are one when you come well prepared. Having good technical equipment, at least a good camera, a strong modem router and fast internet will lead to better picture quality. It’s important that people can also see you clearly!

4. Some hangouts are just basically professionals talking to each other and when it lacks a proper structure such as an introduction, themes that will be covered, development of the topic, peaks, conclusions and ending I will toss it off as pros talking and allowing us to peak into but I do label some of these shows at times boring without being to loud about it but I do take into account that even if one minute of that 1 hour allowed me to learn something new that it was still meaningful. But this is my perception -the public at large might perceive it differently and stop watching your show forever.
I would maybe then do my hangouts differently: A. purely professional B. the other one just for fun and label it clearly.

5. Watching people speak on hangouts, if they are very savy of their area can compel you to search more of what they do, offer and get interested in their products and services. You might turn out to become their fan, recommend their products, the hangout itself and turn into a follower. I must also confess that the contrary also happens on hangouts that watching certain persons who I cannot really connect with I will even less be interested in checking their profile or website. The way you present yourself matters. Whether its on a hangout or in a business meeting you should be conscious about this.

These are a few points I was able to come up with regarding hangouts. If you have some more ideas, suggestions and experience to share with, please post in the comments at the bottom. I will appreciate reading from you.

When I mention an influencer in one of my posts, it will be usually in response to something I watched or read about them. It is in a way a sort of feedback, review and reply to their work which I have found useful, enriching, resourceful and also fun. It is also my way of saying thank you and also since Google+ gives us this functionality I use it to give a shout. It is up to the influencers to react or to ignore.

What do I get if they respond?
First of all, I will appreciate it, remember it, and it will be meaningful to me. I will spread the word to my friends telling them, I got feedback from this person who liked my post and this makes me happy. In return this influencer gets even more popularity and extends their network even more. So, for an influencer it would be very wise to engage with their fans!
Since Google+ makes it possible to communicate with influencers, and quite a few do respond back, you do start noticing after a while who doesn’t. You can take it personal or just toss it off understanding that those persons are also very busy and do get hundreds if not thousands of notifications per day.

You also need to be aware as David Amerland mentioned in this HoA that each profile, or influencer is a real person. See them as a person. Also put yourself in their shoes. We all have limited time, resources and capacities which means an influencer cannot possibly respond on every blog post, Google+ post where you mentioned them, in comments and so on. I believe this is understandable. But I would urge any influencer out there to have a plan, and strategy how to manage their fans responses. Be smart about it.

I believe the win win situation is more in the favour of the influencer than the follower who is recommending them. You do not become an influencer in one day. It requires hard word and social proof and of course something of value which people will value and want to acquire to improve what ever they are seeking.

It can give you some attention of the influencers networks when you get recommended by them but this will also be just for a moment.

Should you seek influencers attention to get more sales?
Money talks. We know from SEO that if you have high authority websites linking to you, this might do your website more good than a large amount of weak websites. Therefore an influencer recommending you can also give you a boost in popularity and get your products and services known to a broader audience. If you are good in what you do and offer you might get more sales. But sucking it up to an influencer for this purpose does get pretty obvious and I’m sure influencers can tell by far already what is your motive. Keep remembering, an influencer is a human. Bring value, get value back.
As some bloggers also recommend, avoid just writing about yourself and what you got to offer. And just like on the social media channels, it works better to bring value to people instead of just showcasing what you have got to sell.
Personally I would avoid sucking it up to an influencer to get more popularity. Just do your thing well and if you are good in what you do, it will get noticed and will spread…